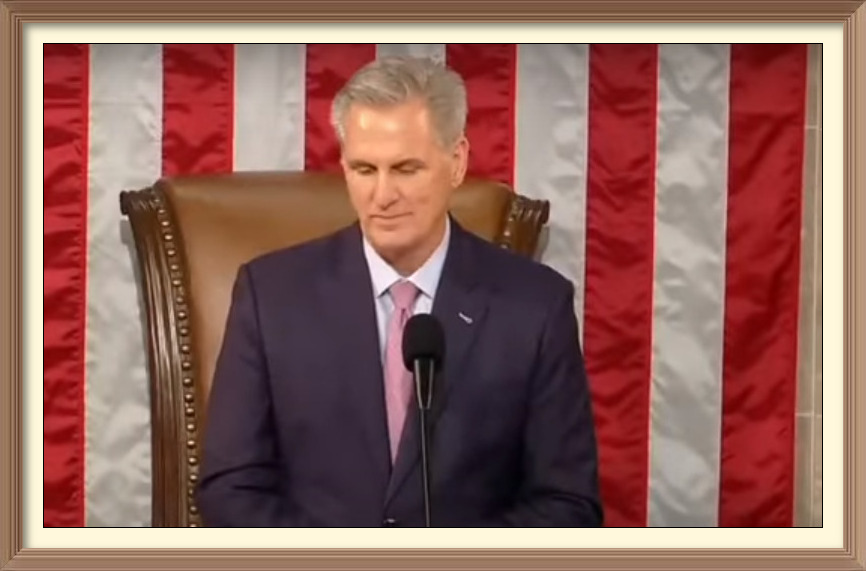 After 15 rounds of voting, Kevin McCarthy was elected Speaker of the US House of Representatives. He was elected after a series of tense exchanges that almost saw fellow Republicans fight.

Despite his party’s majority in the chamber, Mr. McCarthy won the job after 15 rounds of voting.

Matt Gaetz, a party rebel, was persuaded to vote for Mr. McCarthy during a dramatic live pressure campaign on the House floor.

The Congressman from Florida was one of six skeptics who gave in late on Friday.

Mr. Gaetz had previously been nearly at odds with Rep. Mike Rogers, a supporter of Mr. McCarthy, during heated scenes in the chamber. Colleagues had to physically restrain the Alabama congressman as he yelled and pointed his finger at Mr. Gaetz.

The Speaker is in charge of legislating and setting the House’s agenda. After the vice president of the United States, this position comes after the presidency.

In his post on Twitter following his confirmation, Mr. McCarthy wrote: After this week, I hope one thing is crystal clear: Never will I give up. Additionally, I will never give up fighting for the American people.

Mr. McCarthy revealed to the media that former President Trump had assisted him in obtaining the final votes: I don’t think anyone should question his power.

Joe Biden, the president of the United States, expressed his joy at the prospect of working with the Republican Party and wished Mr. McCarthy well in his victory.

He stated, “What we need to do now is that the American people expect their leaders to govern in a way that puts their needs above all else.”

Republicans have already stated that they will launch an investigation into Mr. Biden’s administration and family business dealings.

Mr. McCarthy was able to persuade 14 Republican skeptics to cast their ballots for him in a remarkable turnaround during the 12th round of voting. For the 13th vote, a 15th rebel voted in the same way.

Mr. McCarthy insisted to reporters that he would “have the votes” to take over as speaker after the 13th vote was postponed.

However, the California congressman failed to win on the 14th ballot once more amid chaotic and dramatic scenes because he was still three votes short of the 217 votes he needed to win.

Members of the House Freedom Caucus were among the dissidents, and they argued that Mr. McCarthy was not sufficiently conservative to lead them in their efforts to oppose Democratic President Joe Biden’s agenda.

The rebels have accepted a number of concessions from Mr. McCarthy, one of which is a seat on the influential rules committee, which determines the terms under which legislation is debated in the chamber.

Additionally, he agreed to lower the number of House members required to trigger a vote on whether to unseat the Speaker to one, making it possible for the Republican coalition to easily fracture once more even after Mr. McCarthy’s victory.
As Montana’s Ryan Zinke, the final politician on the roll, cast his vote, the House floor erupted in applause as it became clear that Mr. McCarthy had won.

Mr. McCarthy gave other representatives hugs and signed autographs, but the Democrats’ side of the room was completely silent across the room. There was no applause from Democrats.

Senior members of the Democratic Party compared the standoff to the riot on Capitol Hill exactly two years ago by Trump supporters who disrupted Mr. Biden’s certification as president and accused Mr. McCarthy of ceding power to an extreme wing of his party.

Don Beyer, a congressman from Virginia, also mentioned the outbursts of rage among Republicans following the 14th count.

He stated, “Unsettling that this process comes to an end with threats of violence in the House Chamber, on this of all days.” Even if it did not influence the outcome, that is not how the people should be treated. Even after this session is over, a gloomy and harrowing moment will probably remain in people’s minds.
The minority Democrats had continued to vote for Hakeem Jeffries, the first black person to lead a party in Congress, as their leader.

Jokingly, Mr. McCarthy began his acceptance speech: that was simple, right?” He talked about a number of Republican policy goals, like lowering prices, protecting the border between the United States and Mexico, and fighting what he called “woke indoctrination.”

He stated that reducing “wasteful Washington spending” was one of his primary objectives.

14 hours after the gavel rang at noon, the lawmakers began to leave the Congress around 02:00 local time.

In the lead-up to the American Civil War, in 1860, the lower chamber of Congress has not voted so frequently to select a speaker. It took 44 ballot rounds back then.

By a smaller margin than anticipated, Republicans won the House in the midterm elections in November by 222 votes to 212. Senate control remained with Democrats.